This is a brief history of Tower Tech, the industry’s most innovative manufacturer

Who is Tower Tech?

Tower Tech is committed to Sustainable Efficiency through innovative solutions that quickly adapt to a smart world. Efficient products can make meaningful contributions to reducing energy consumption and environmental impact without sacrificing the value proposition for the stakeholder. Tower Tech is leading the way through products that effectively bridge the gap between Sustainability and Energy Efficiency. Companies have focused on chasing energy efficiency or environment sustainability but figuring out how to combine them with sustainable efficiency is much more complicated. The true holistic business strategy of Tower Tech is manufacturing a more viable and efficient product that is cost effective while generating a minimal carbon footprint. Moving to sustainability and providing it efficiently makes sense in a resource-constrained global economy. 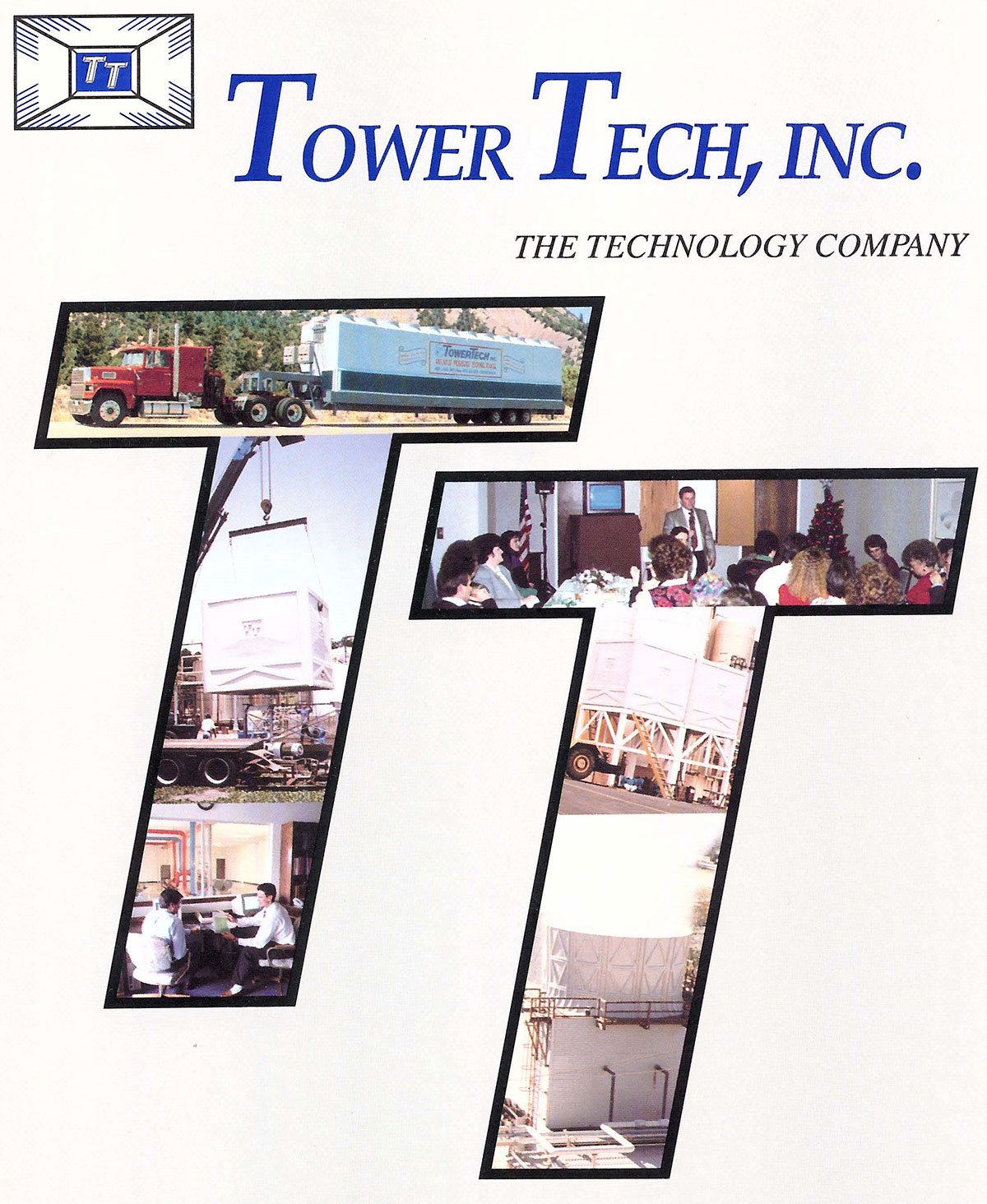 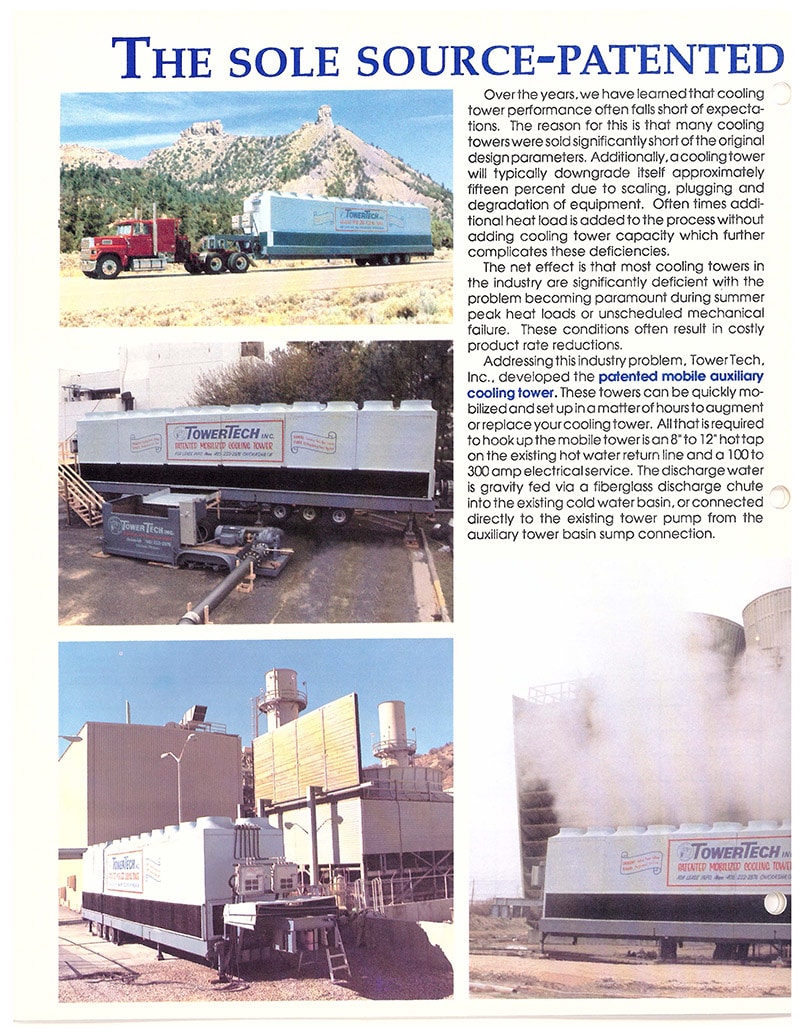 While highly successful, the rental fleet’s primary use was for emergency tower replacement and additional cooling needs at peak demand during summer months. In 1991, Tower Tech decided to develop a new generation of cooling tower that would be radically different and better than other manufacturers’ towers. Different alone was not sufficient impetus for a customer to justify the purchase of a manufacturer’s new tower line. It was imperative that the design significantly improves upon the conventional design philosophy that permeated the cooling tower industry. 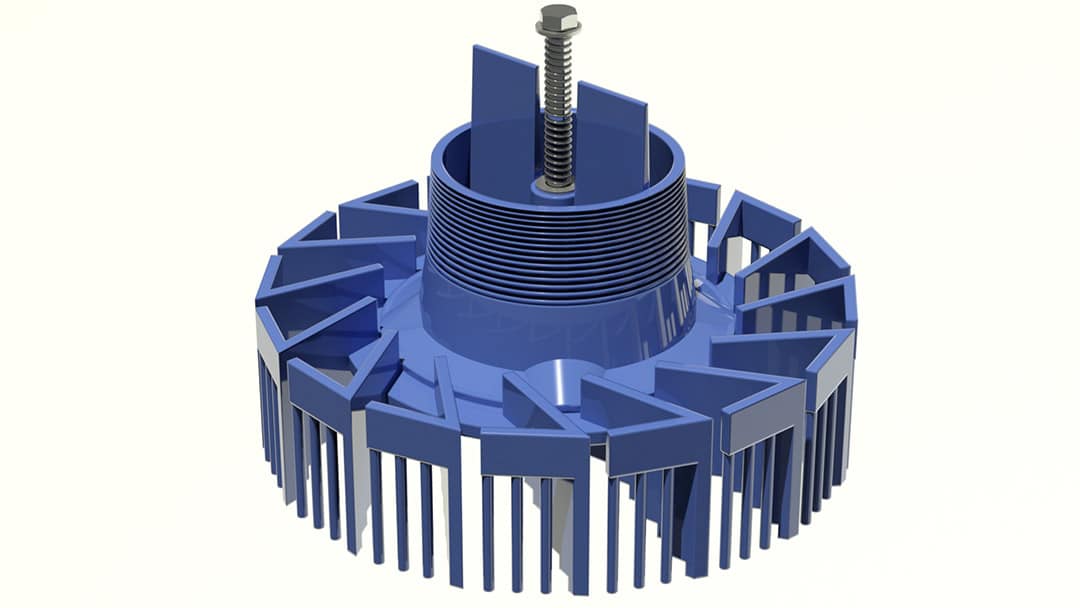 Paralleling the development of the mobile tower, the new tower had to be packaged so that it could be delivered unescorted on a conventional semi-trailer. In addition, it was decided that the new design should not require assembly by field personnel. These constraints forced the development of a new water distribution system to minimize the height of the tower. This design objective added a requirement to minimize the ability of the water distribution nozzle to clog. This was essential since a primary deficiency of conventional nozzles is their tendency to clog, especially in dirty-water applications and in applications where bacteriological growth is likely to form. Since cooling tower nozzles are designed for a primary flow rate, and performance drops off dramatically at off-design points, it was apparent that a design that would maintain hydraulically-uniform water distribution at varying flow rates would have exceptional market potential. The design that resulted, the Rotary Spray Nozzle, achieved a low water profile by employing a lateral spray pattern, provided essentially clog-free operation by incorporating a turbine into the nozzle, and maintained a spray pattern size and near constant pressure drop by use of an automatically-adjusting flow-sensitive orifice. The nozzle required less pressure head to since the turbine in the nozzle was a much more efficient device than the atomization approach used in a conventional fixed-orifice spray nozzle. Two patents on the design were awarded in the 1990s.

Another design shortcoming of ‘conventional’ cooling towers is their cold-water collection basins. These open basins tend to accumulate trash, are exposed to direct sunlight, and contain regions of stagnant water. In combination, these can lead to excessive sediment build-up and increase the need for algaecides and biocides. Tower Tech’s enclosed, elevated-basin design is called a Flow-Thru Basin. This design feature eliminates most of the problems associated with conventional basins and removes the inefficient free-fall rain zone. Pump energy requirements were reduced, basin maintenance was virtually eliminated, and there was a reduction in algaecide use since the basin water was not exposed to sunlight. In addition, the Flow-Thru Basin significantly reduced the amount of dirt and trash that is typically blown into an open basin. The self-cleaning nature of the Tower Tech Flow-Thru Basin eliminated the build-up of sludge, common in stagnant regions of most towers. Bacteria, such as Legionella, can remain protected from chemical attack under this sludge. 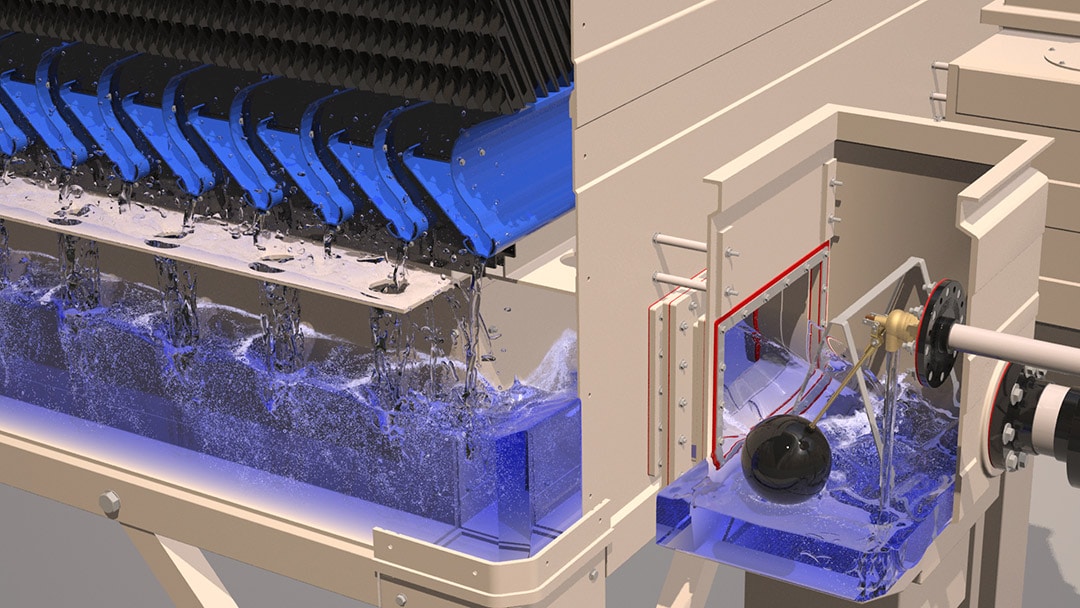 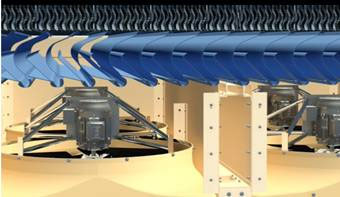 The Flow-Thru Basin on the Tower Tech design was made possible by the invention of a system of water collection channels above the fans. These channels move the water laterally from the bottom of the fill to the enclosed basin while still allowing air into the fill. Patents on the Water Collection System were awarded in the 1990s. The installation of the Water Collection System creates a dry region under the tower. This allowed for the removal of the fan from the moist, hot air stream on the top of the tower. Placement of the tower mechanical equipment at ground level increased the longevity and maintainability of the equipment.

To add flexibility to the modular design, a number of small fans were used instead of a few large fans. This made motor replacement less expensive and the increased number of fans for built-in redundancy. If a motor fails the entire tower module stays in operation with a minimal reduction in thermal performance. The performance of the new modular design was optimized by the installation of relatively small motors that were installed vertically (shaft down), and fans were direct-drive, which obviated the need for gear reducers, driveshafts, couplings, or pulleys. 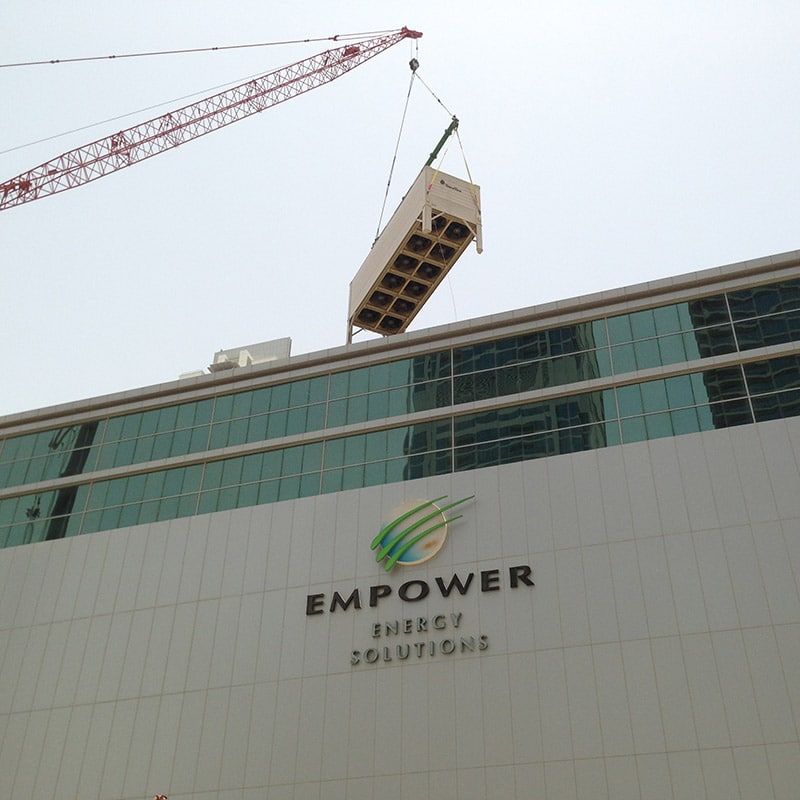 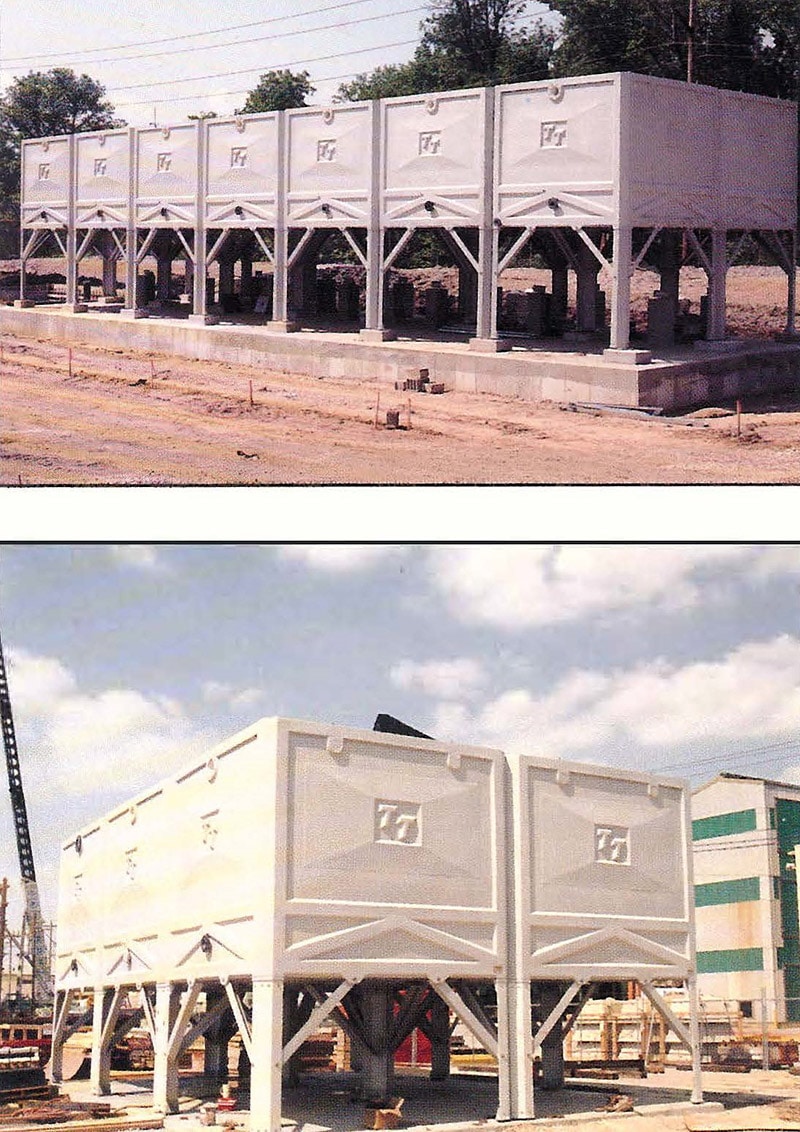 While successful, the hand-laid tower proved too costly to manufacture. Extensive manpower was required to construct the tower and the reliance on man-made parts also made it difficult to maintain consistent tolerances. Also, the added cost of hand-laid fiberglass priced the tower on the high end of the market. To counter this fundamental drawback, the decision was made to change from a hand-laid fiberglass tower to a pultrusion fiberglass design. 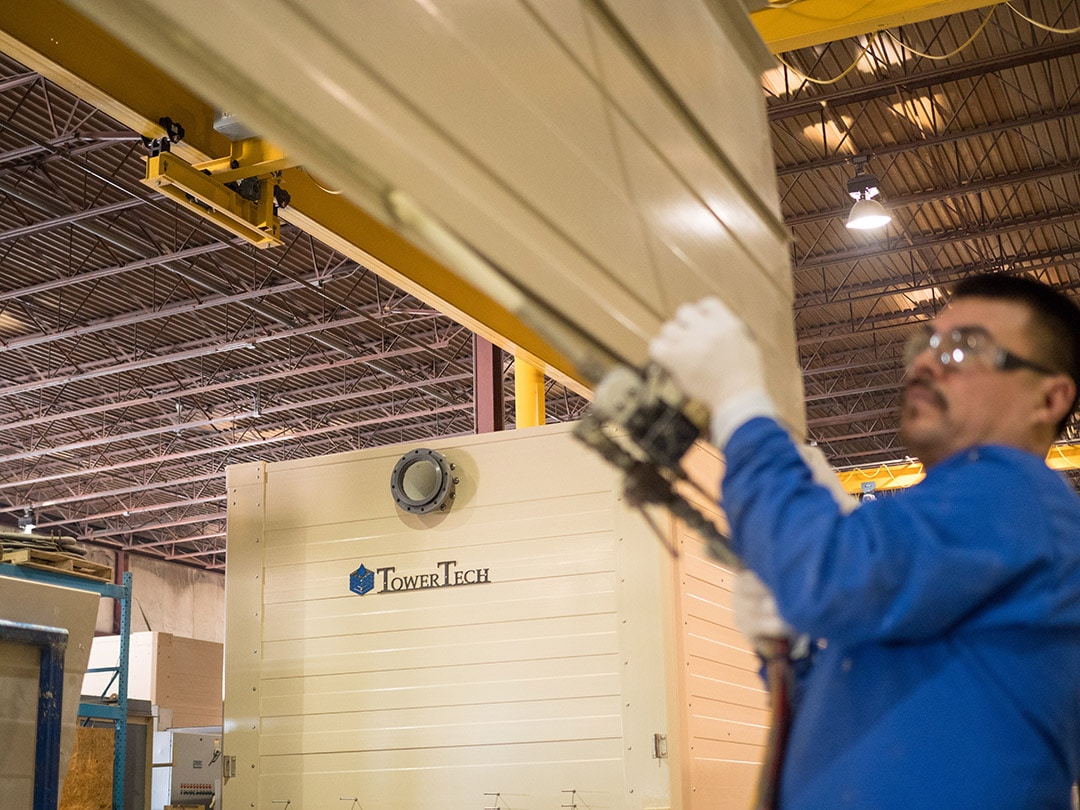 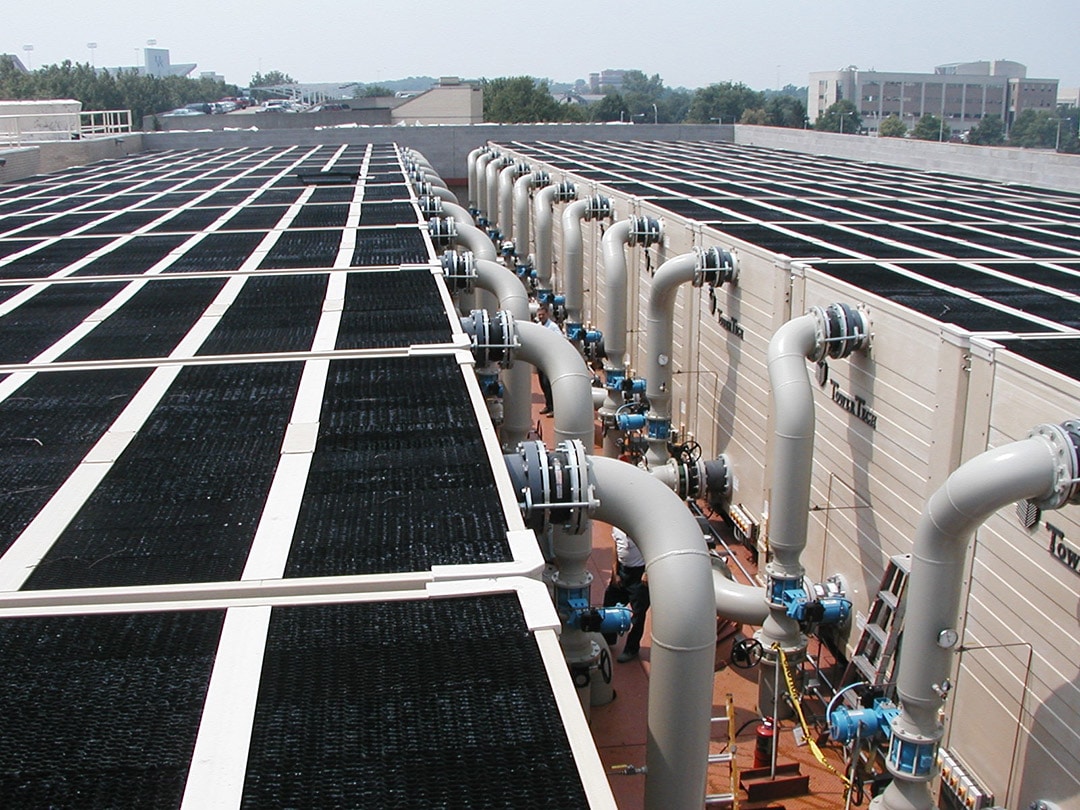 An initial public offering of the company’s stock was made in 1993 to finance the redesign of the modular tower. A rotational mold and several pultrusion, injection, and fiberglass fan stack molds were designed and built. The plastic parts were made of corrosion-resistant ABS, glass-reinforced nylon, and polyethylene. At the time, the fiberglass parts were the largest pultruded profiles in the world and Tower Tech was awarded the Composite Structures Association Excellence in Innovation award in 1995. A patent for the pultruded, elevated basin was awarded in the 1990s. The first pultruded fiberglass tower was sold in 1994.

Much of the success of the fiberglass tower can be attributed to the company’s decision to have the Cooling Technology Institute (CTI) certify thermal performance in 1993. An annual retest by CTI has maintained the certification continuously since 1993. 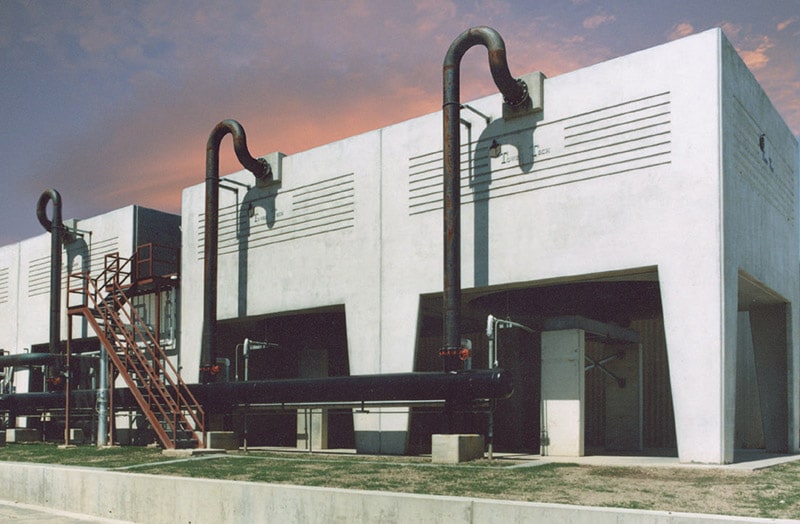 A majority of the package cooling towers sold by the cooling tower industry are used in the commercial (comfort cooling) segment of the market. Until the 1990s, it was thought that packaged towers did not lend themselves readily to larger industrial and utility applications, so in 1994 Tower Tech developed a modular concrete cooling tower using a design similar to its already successful factory assembled fiberglass modular cooling tower. Concrete tower cells could be erected using any of the three common construction methods: cast in place, precast, or tilt-up. In all three variations, concrete columns and walls defined the perimeter of each cell, and concrete troughs on the exterior or the interior of each tower cell channeled cooled water from the Water Collection System into a grade-level cold water reservoir situated at the end of a row of tower cells. The Water Collection System rests on the concrete troughs, however, due to their expanse, they are also supported from above, within the tower cell. The water distribution systems are constructed either of concrete-encased pipes or PVC piping. The tower mechanical equipment is mounted on a concrete post or lintel beneath the tower. This arrangement provides for the same easy access and rapidity of maintenance found on Tower Tech’s line of factory assembled modular cooling towers. The Tilt-Up Concrete Association’s presented its Innovation in Design Achievement Award to Tower Tech in 1995, and method patents on the concrete tower design were awarded to Tower Tech in 1996. Tower Tech sold and erected its first concrete tower in 1995, and by 2001 more than a hundred concrete modular cooling towers had been erected worldwide. 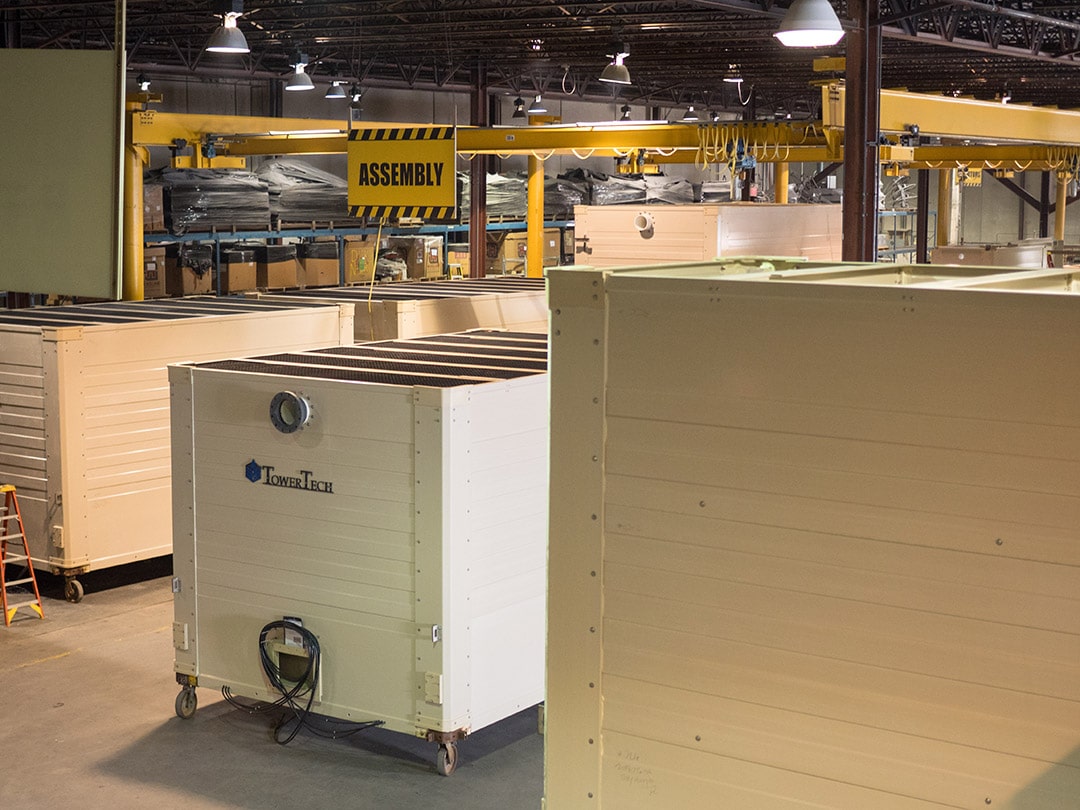 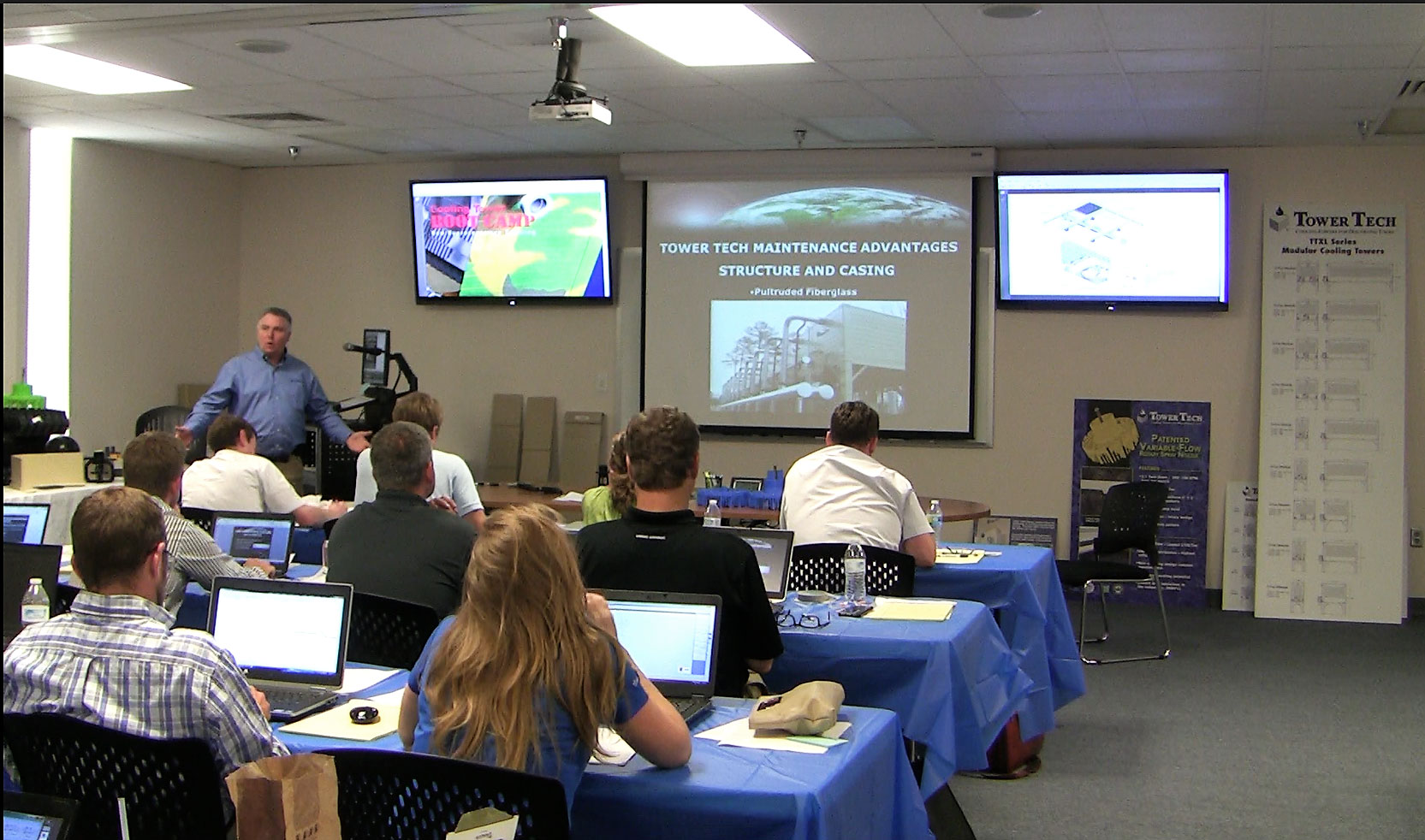 Our factory-certified service team can assist you with the maintenance of your tower and OEM parts. We can recommend a Tower Tech factory-authorized service provider in your area, or our expert service team can perform inspections and maintenance for you. If you prefer to service your tower or have a local contractor do it, Tower Tech University offers an intensive hands-on service training curriculum that teaches you or your contractor everything that is needed to keep your tower operating at peak efficiency and performance. Only a factory certified technician should perform service or maintenance on a Tower Tech cooling tower to safeguard the integrity of the warranty. Our Customer Service Hot Line gives customers a personal link to highly experienced Service Representatives who can help you create a preventive maintenance plan for inspections and service plus provide immediate answers to any technical questions, and help you obtain spare and replacement parts as needed. 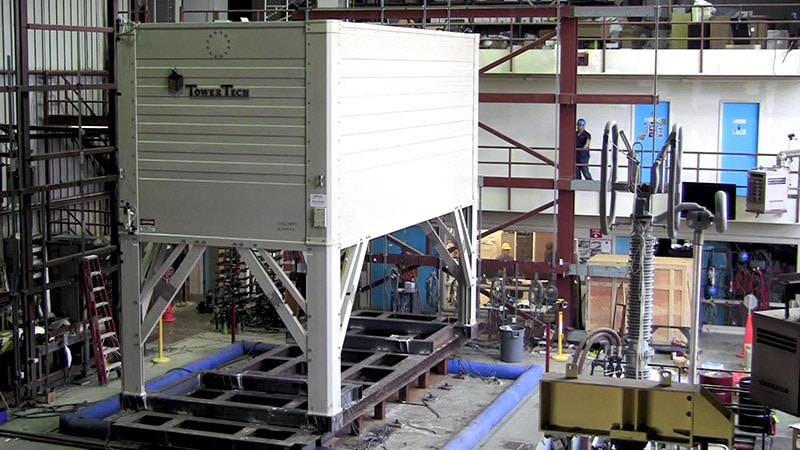 Creative Pultrusions, Inc. (CPI) announced the successful acquisition of Tower Tech (TT) on August 15th, 2017. TT is a division under CPI, a subsidiary of Hill & Smith Holdings PLC (http://www.hsholdings.co.uk/) which is listed on the London Stock Exchange. Hill and Smith is an international group of companies with more than 4,000 employees in 7 countries with annual revenues approaching $1 billion USD.

CPI has manufactured custom fiberglass reinforced polymer (FRP) cooling tower profiles for TT for twenty years. The acquisition will position CPI and TT to increase market share and revenue through product expansion and acquisition of complementary products. Hill and Smith Holdings family of companies provides unique synergies through the depth of resources they provide

Over the course of two decades, Tower Tech has grown from a small wooden cooling tower constructor to a mid-sized manufacturer that’s well known for offering innovative cooling towers that are easy to install and that offer ultra-low operating costs, excellent maintenance and safety characteristics, unmatched redundancy, and long service life. Tower Tech enjoys a niche in the comfort cooling market, process market, and co-generation market. The company’s revolutionary design has been accepted by numerous offshore companies who now promote Tower Tech technology in their respective countries and regions.

To date, Tower Tech and its international network of partners have sold more than 3,000 factory assembled modular cooling towers valued at more than $250 million. 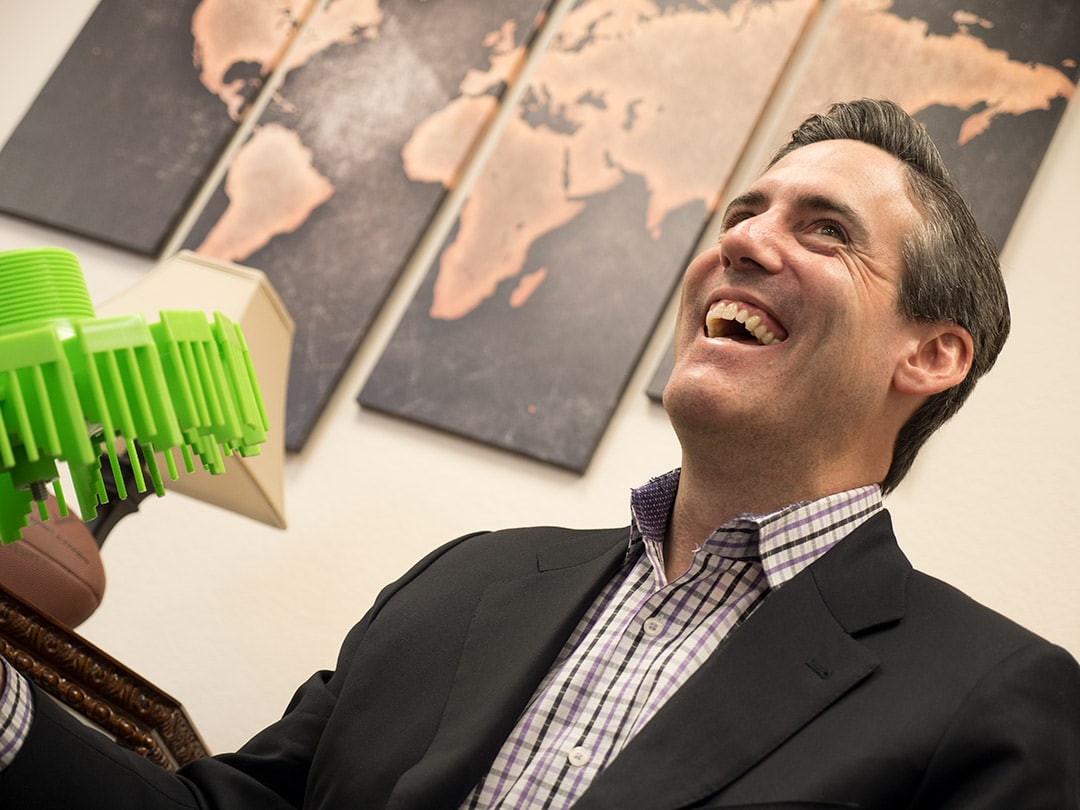